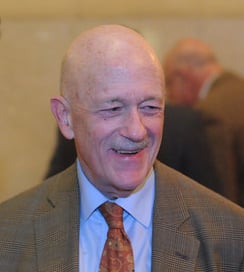 William (Bill) Mullen, professor of classics, taught at Bard College from 1985 until his death on November 2, 2017. During his 32 years at the College, he had a profound impact on generations of Bard students. He was instrumental in the development of the Classics Program and First-Year Seminar. Professor Mullen was, writes President Botstein, “one of the College’s most beloved professors.” His loss is deeply felt at Bard and beyond.